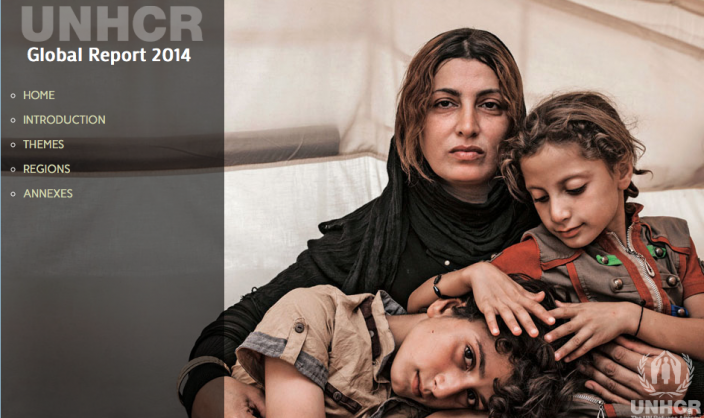 “By end-2014, 59.5 million individuals were forcibly displaced worldwide as a result of persecution, conflict, generalized violence, or human rights violations. This is 8.3 million persons more than the year before (51.2 million) and the highest annual increase in a single year.”

The numbers were published in 2015, and we are now in 2016. The update at the end of 2015 was as follows. Take a reasonably filled average subway car, then realize that one passenger has been forcibly moved from home. One in one hundred and twenty two. The planet has never seen this before. Can we avoid this? Of course not, it is already there. As for a near future, it would be wishful thinking. Neither dictatorships have shown humane qualities, nor have democracies shown outstanding results in the domain of prevention. And there is no magic wand in sight.

As the planet makes headways into the 21st century, discrepancies in freedom and revenue, coupled with the relative ability and need to travel long distances, create strong polarities between places you do not want to be and places where you would like to be or have to go. Not that where the “plus” is located is a welcoming place either. But one way or another, the “minus” is too dangerous. So people leave.

And they end up somewhere. Most likely not a suitable place. Not only because of the living conditions, as in refugee camps, but also because almost 22 millions of those refugees and asylum seekers end up in foreign, unfamiliar environment.

What does it feel like to be a refugee

What if you were to resettle on the icecap? First of all, you do not leave after saying to yourself: “This is a great day, I got my credit card and the car is fueled up, let’s go guys.” There is no need to describe the trip conditions either. Now, you are on this icecap. Imagine a place where people speak a really different language and have different customs whereas you only knew about yours. On top of this, you depend on the goodwill of the people who have been living where you just landed and you have no clue about most of the way they function.

Half of the displaced are less than 18 years old. Most likely they are there to stay. Out of the 60 millions displaced mentioned above, only two hundred thousand were able to return home in 2014. So you better adapt, if you can. But then…

Do you know Steven Pressfield? In case you don’t, I will leave you to the pleasure of discovering this immense writer. Aside from his work on Greek antiquity, he has written a gem of book: “The war of art”—I guess pun intended—on overcoming resistance in doing what you are called to do. There is one chapter entitled “Resistance and fundamentalism.” Here is just one quote on the difference between the artist and the fundamentalist (more on the meaning of those terms further): “The difference is that while the one looks forward, hoping to create a better world, the other looks backward, seeking to return to a purer world from which he and all have fallen.”*

Rather than undertaking a lame attempt at paraphrasing Mr. Pressfield, let us see what leads us one way or the other and what are the consequences for our societies.

Cultures have different stages of development. A higher level does not mean “better,” it just means that it moved on, beyond where it used to be. For the same reason that you could not say that an adult is “better” than a child, you could not either say that one culture is “better” than another. A culture works where and when it happens until circumstances change and the culture either evolves or is replaced by another one. No-one said it ever was easy. Becoming an adult is easy compared to watching how millions of people go through a culture change. We have seen the violence.

Still, the main culture trap is to think that yours is the best. What happens five, or ten, or two people from different cultures are gathered in the same room? Now, what if they need to agree on something “important”? You get the idea. It takes a while before we can accept diversity to its full extent. Not until then can we leverage culture diversity. And not until then will the above mentioned people leave the room happy.

Back to our realities. From the perspective of the hosting countries, there are tons of problems that we are daily reminded of. There is the notion that we did not ask those guys to come in the first place, we do everything we can to help them, this costs money, some (most of them) are useless, lazy, terrorists… Indeed, it is a problem. This is more than a practical issue. Even though staying alive is the primary goal, but then what? Are we hoping that they all learn our language and become taxi drivers? Are we talking about proactive assimilation, or just paying lip service to people that we did not see coming, are expensive, and will cause all sorts of troubles?

What is proactive assimilation anyway? Do we want them to become like us? This is an illusion. In the world of today, we have no idea what is the future of cultural identity, aside from increased diversity in the same locale.

How about lip service? Because of a twist of fate, we did not see them coming? The “we” is in fact the political layers of many Western countries. Fear of the other sells much better than integrative policies, especially when money is scarce. When winter is approaching, do you just hate it, or do you prepare for it? What are the excuses for not looking at this reality too? The way it is done, the whole thing is blotched and expensive.

Trouble becomes a self-fulfilling prophecy. And forget about exporting democracy to those troubled war-ridden dictatures or shattered by climate no-more-banana republics. They are often the fruit of Western historic greed and denial. And they are not ready for a democratic model that has  besides started showing obvious signs of fatigue over here.

Now look at this situation from the perspective of the refugee (note: just to make sure, this is a generalization, each individual is different). “I come from a place where things have been the same for many generations. There were challenges before, of course. But now, hunger, war, have made it impossible for me to stay home. I know that out there, there are places where life will be easier. I try to go there. May be I die on the way, but at least I will have tried. Now, I get there. The people are different. Not that they are all bad or good, it is like everywhere: people are people. But I do not understand most of life here. Everything is unfamiliar: language, food, clothing, climate, how to address people and how to feel like I am real person. I must have lost this knowledge along the way. This feels like a different planet. What will happen to me?”

This uncertainty about the future is key. While the Western creative sees hope in the future, the displaced see also many dangers. And there is a very fine line between heading into the future and falling backwards into ideals of the past. The young are especially influenceable. Put them in closed quarters with others who chose to go back to the paradise lost, and you get more fundamentalists. We all know this, it is not written on their face. Neither was it written on the face of some of our ancestors when they too fell for any kind of fundamentalism. May be they killed people too, but that was before, not now, so it does not feel the same. Not us. Also, they did not have the technology. We do, so do the fundamentalists.

We have all known that immigration in its different faces was going to be a growing issue. Overall, and as already mentioned, the politicians have not done much about it and feels as if they have learned to feed on fear. They got stuck on the “minus” but forgot the “plus.”

How do we deal with this? One could think of thousands of measures and then get into endless discussions about how much it costs and does or does not work. It is be better to start focusing on the mental posture. This is an individual thing. There is no need to wait for some guy somewhere to emerge from a meeting with a line of credit.

First, we need to come to terms with the fact that refugees are coming and this will not stop. Why, some of us could become them too. Then take a proactive stance and design a hopeful view of the future. Those who think this is easier said than done, should take it as a sign that they may be taken hostage by values of the past. It is fun to move on. Finally, educate ourselves regarding cultures. Understand that our culture is not the best but that other may think theirs is.

Work from there. No-one ever said it was easy. We have to go forward. But would we rather take this challenge or live in a future ridden with fundamentalists, whoever they are?